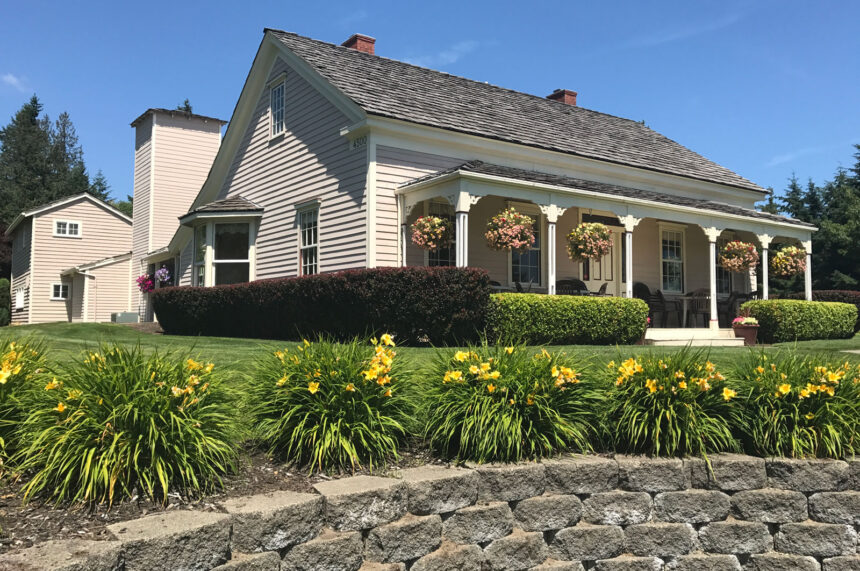 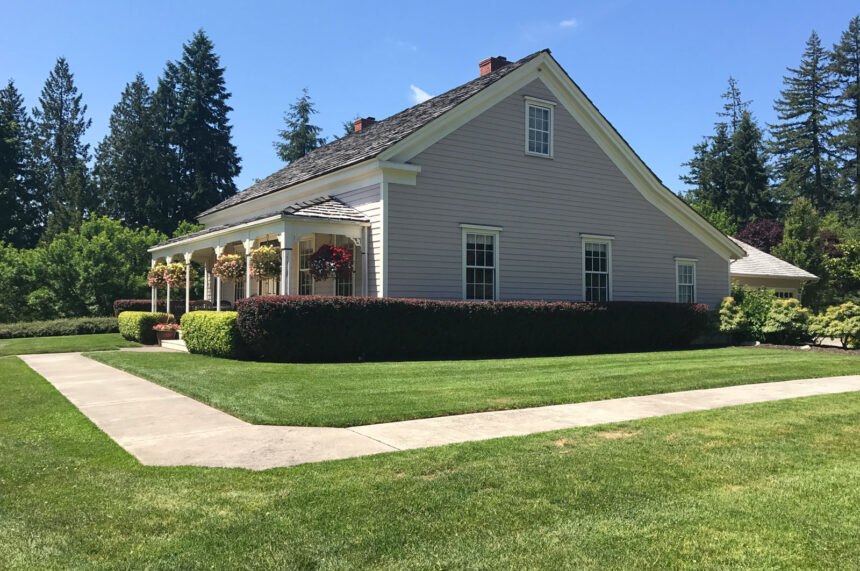 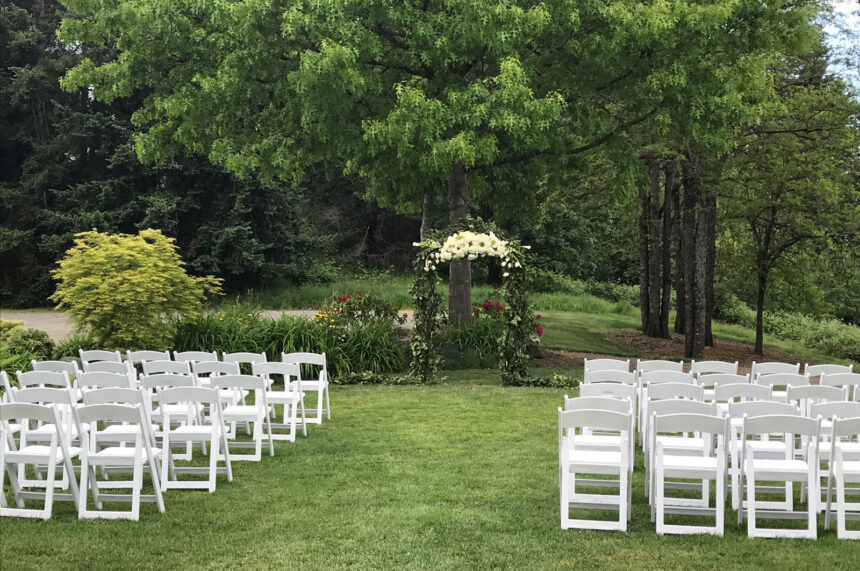 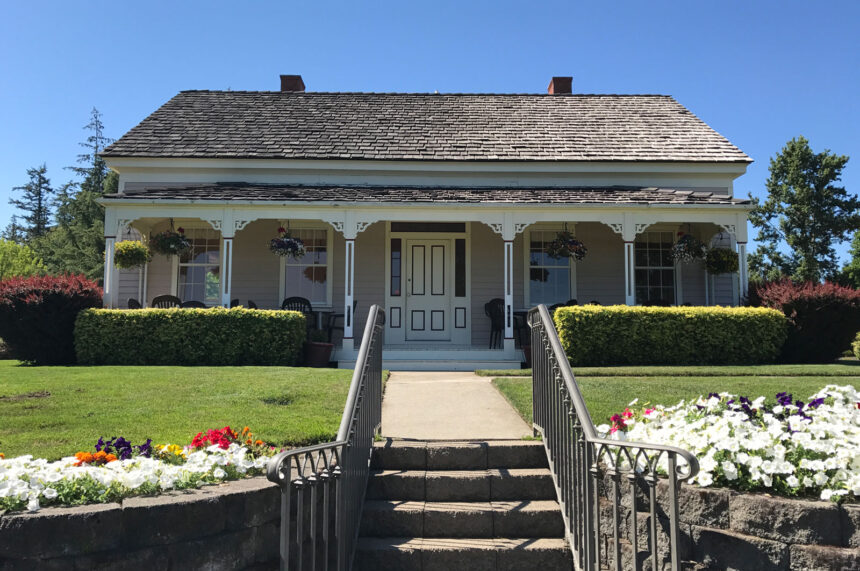 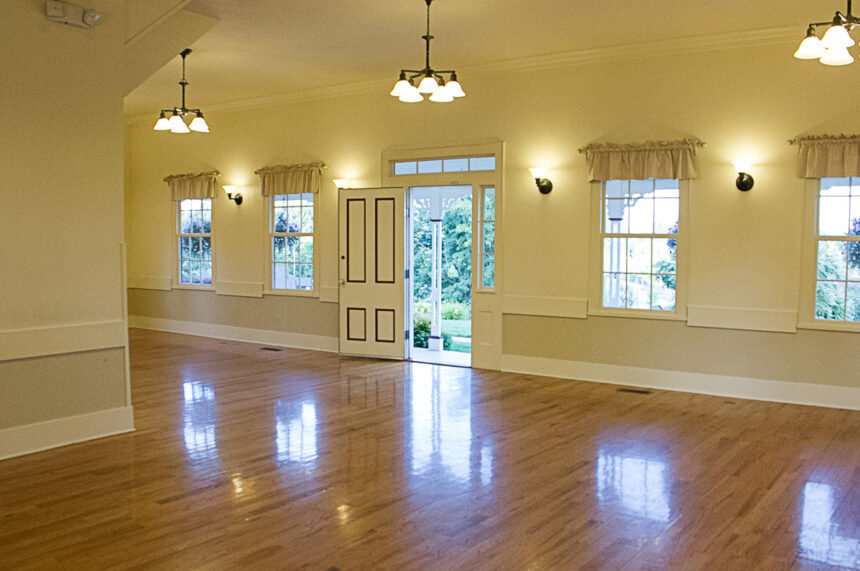 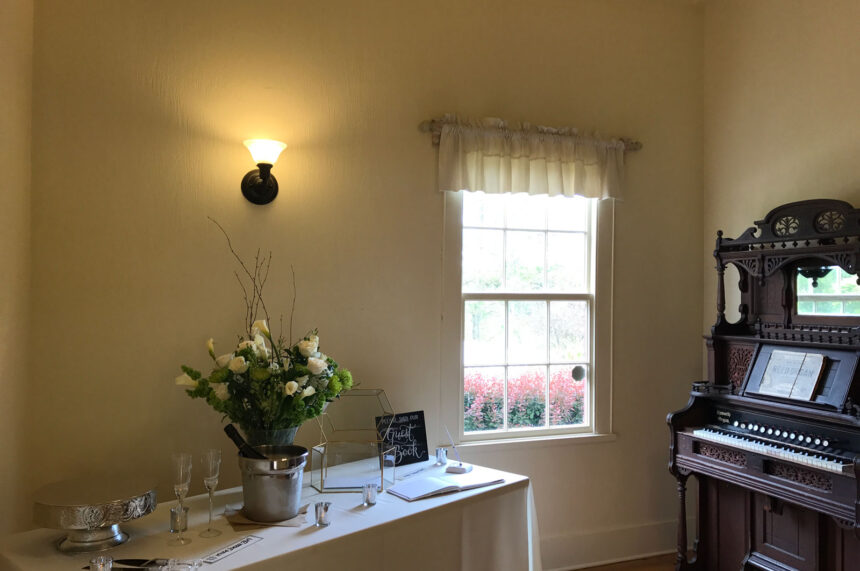 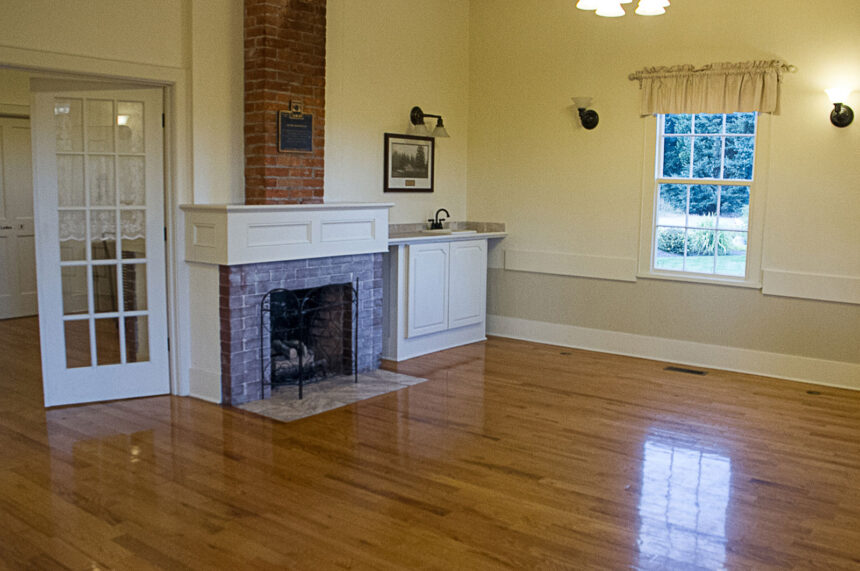 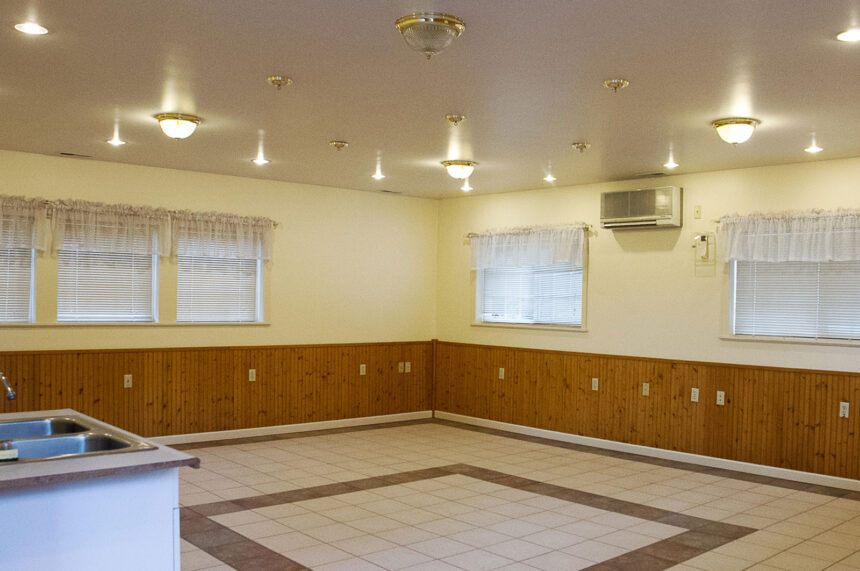 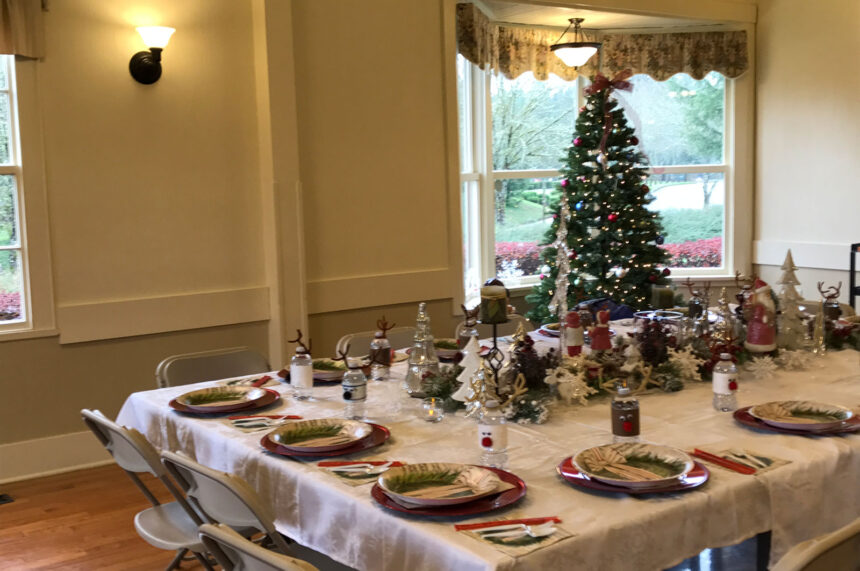 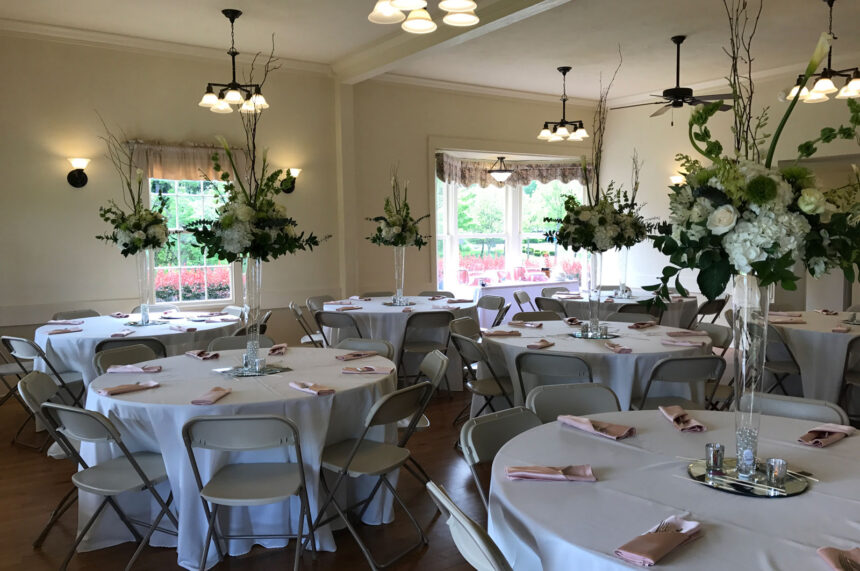 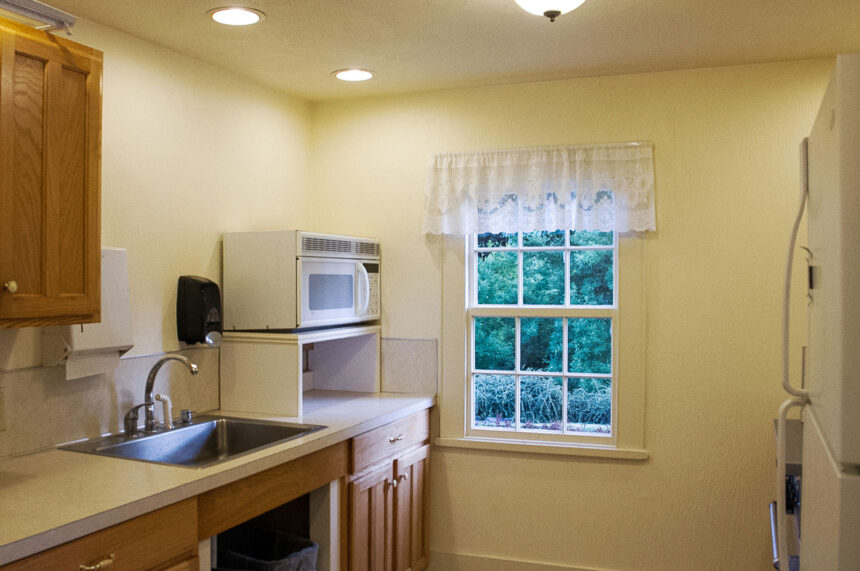 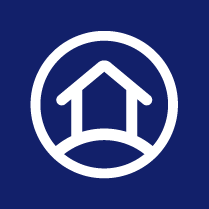 This civil war-era structure, constructed in 1859, is the oldest residence in Lacey and one of the oldest homes in Thurston County.  It features 3 acres of park-like grounds. Available on a rental basis for weddings, receptions, seminars, and retreats.

A Piece of Local History….

Constructed prior to the Civil War in 1859, the Jacob Smith House is the oldest home in Lacey and one of the oldest residences in Thurston County.  The Greek Revival-style structure, with its signature square water tower, is located in Lacey Corporate Center at 4500 Intelco Loop, SE.  It is listed on the city and state registers of historic places.

The house, situated on the crest of a small hill with a commanding view of Mt. Rainier, was the centerpiece of a prosperous 440-acre spread where Jacob Smith and his wife Priscilla raised seven children, wheat, and a large number of sheep.  One of their great-grandchildren became a famous crooner named Bing Crosby—their oldest daughter, Cordelia Jane Smith, married Nathaniel Crosby III of Tumwater in a wedding ceremony held at the home in 1860.

The residence remained in the Smith family until 1955, when it was sold to Robert Wohleb, son of famed architect Joseph Wohleb.  For many years, the Wohlebs used the house as a country retreat.  Robert’s widow, Elizabeth, continued to own the home until 1985.

Newspaper accounts from the mid-1890’s reported that the Smith residence was “noted for its hospitality and good cheer” and served as the scene of many social gatherings in the community.  More than a century later, the house once again serves this function hosting weddings, reunions, meetings and retreats.

The Main Room features hardwood floors, 11-foot-high ceilings and a fireplace nook. With windows facing every direction, the room is airy and bright in any season. The covered front porch is immediately adjacent.

A perfect spot to showcase a wedding cake, champagne fountain, or even a small string ensemble.

The fireplace nook serves as an extension of the Main Room, and features a working gas fireplace, service counter with bar sink, and decorative sconces.

The Carriage House features oak wainscoting and tile floors, making it a great room for smaller functions. It also works well as a dance floor or staging area for larger functions when rented in conjunction with the entire facility.

Running the full length of the front of the house, the covered Greek Revival-style front porch offers additional seating in warmer months and a spectacular view of Mount Rainier and the surrounding grounds.

Our friendly, knowledgeable staff is prepared to help make your meeting, reception, or family gathering a success, and will be available the day of your event to assist with room set-up.  A small service kitchen is included with rental of the Main House, and is equipped with a range, refrigerator, and coffee pots that will support small group functions (many excellent catering services are available in the surrounding area).  Rental of the main house also includes use of the park-like grounds.

Audiovisual equipment and other support items are available for nominal fees.

All rates are subject to change without notice.

Rates available Monday through Thursday, 7AM – 10PM., Fridays 7AM – Noon.

Commercial use is defined as a function for the sale or promotion of goods and/or services, or for conducting the business of or training of a private organization.

Sales Tax of 9.4% will be charged on all Equipment Rentals.

The Jacob Smith House, when not in use for Parks and Recreation Department sponsored or co-sponsored activities, will be made available for a fee to groups for events and activities consistent with the rules and regulations of the Park Board. The Jacob Smith House will not be made available to any group or organization that promotes discrimination, or has a record of discrimination on the basis of race, creed, color, national origin, gender, marital status, age, sexual orientation, or the presence of any sensory, mental or physical disability. Permission to use the facility does not constitute an endorsement of a group’s philosophies, policies or beliefs. Reservations are on a first paid, first served basis.

There will be a $50.00 cancellation fee for weekday reservations and $100.00 cancellation fee for weekend reservations. Cancellations made 90 days or less before the reserved date will result in the loss of the entire damage deposit. Cancellations made less than fourteen (14) days in advance of the reserved date will result in charges of the full rental fee. No refunds will be given due to inclement weather or violation of facility rules and regulations.

Commercial Use: A gathering for sale or promotion of goods and services, or conducting business/training of a private organization.  Any other use shall be defined as “social.”

Deposit: An amount paid in advance of an event to secure a rental and to insure proper cleanup, and to cover breakage, loss or damage.  Reservations will not be booked without payment of the deposit.

Staff Fee: The fee charged for staffing the facility to accommodate a rental.

Reservations for space will be accepted in person at Lacey City Hall or by phone (no online reservations accepted) and must be approved in writing by the Jacob Smith House Manager or the manager’s designated representative.  The date is reserved when deposit or payment is received.  Reservations for full fee private use may be made a maximum of fifteen months prior to the desired date.

Reservations for other uses are outlined in the complete Jacob Smith House Rental Policies and Procedures manual in Section IV.

No refunds will be given due to inclement weather or violation of facility rules and regulations.

Alcoholic beverages are permitted in the banquet facility and outside patio area. Requests for the use of alcohol must be made at the time of application. A banquet permit is required. Non-Profit organizations wishing to sell alcohol at a fundraiser will need a Special Occasion License.

No alcoholic beverage shall be served to any person under 21 years of age.

The City of Lacey may require the applicant to carry insurance coverage and pay for certified security if, in the opinion of the city, the event warrants such requirements.

The City of Lacey will not accept liability for injury to users, loss of personal property, or damage to property of the group or an individual.

Groups composed of minors shall be supervised by one adult (18 years of age or older) per 20 juveniles at all times while using the Jacob Smith House.

Application for use of the facility must be made by the adult who will be responsible for and in attendance at the activity.

Any decorating or other alterations to the existing facilities will be subject to prior approval of the Jacob Smith House Manager or the Manager’s representative. No objects are to be suspended or attached to ceilings, walls, or windows without prior written approval. Use of any open flame or non-fireproof materials is, as a general rule, not permissible in any public building.

Rice, birdseed, confetti, etc. is not permitted inside the building or on the grounds.

No smoking of any kind is permitted inside the Jacob Smith House or within 25 feet of building entrances.

Thinking that our venue might be right for your event? Take the next step and take a tour! You can do this in person and using the online virtual tour below.

Please call during regular business hours, Monday through Friday, 8AM-5PM to set up an appointment to view the facility.
(360) 491-0857

Ready to reserve a space? Please fill out the form below to get started and one of our staff will respond to your inquiry in approximately 3 business days.

Further questions about your inquiry or our facilities can be directed to: